The Chosen, adapted by Aaron Posner and Chaim Potok from the novel by Chaim Potok 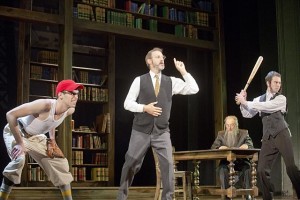 [PITTSFIELD, MA] – Chaim Potok’s The Chosen, currently in a magnificent production on the Mainstage at Barrington Stage Company,is the story of two Jewish teenagers, rivals at first and then fast friends, and their fathers, set in Williamsburg, Brooklyn, during World War II. Performed by an exceptional ensemble cast of five actors, the play is a powerful and relevant exploration of parenting, of loyalty, of tradition, and ultimately, of love. Adapted by Aaron Posner and Chaim Potok from Potok’s novel, and brilliantly directed by Posner, this story of the clashes between the two families,

engendered by the very different Jewish communities to which they belong, is timely and illuminating in our world of division and conflict.

The teenaged Reuven Malter, beautifully played with conviction and passion by Jeff Cuttler, is an observant Jew, living with his widowed father Daniel, a revered scholar and teacher. Adam Heller is ideal as Daniel Malter, portraying him with warmth and wisdom. As well as a promising Talmudic student and mathematician, Reuven is a skilled baseball player, and when the play begins, we see him warming up his pitching arm.

Richard Topol plays the adult Reuven Malter, who is our narrator and guide through the world of 1940s Brooklyn, as well as two other characters, and he is perfect as our storyteller, in a carefully calibrated performance full of humor and energy that shifts from explanation and description to his characters and back again.

As young Reuven gets ready to play ball, we meet Daniel Saunders, the son of the powerful Hasidic rebbe, as he steps to home plate to bat. Ben Rosenbach portrays Daniel with a brilliant intensity and intelligence. Richard Schiff plays Daniel’s father, the leader of the Hasidic 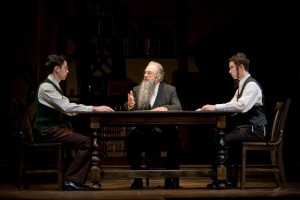 community; Schiff’s performance is authentic, imposing, compelling, and memorable. Daniel is expected to succeed his father as the rebbe, but he is very conflicted about his future.

The friendship between the two boys begins as they stare at each other across the baseball diamond, their rivalry rooted in the different kinds of Judaism that they practice. But they have much in common, and their friendship allows the playwright to examine the two very different ways the fathers choose to parent their sons. 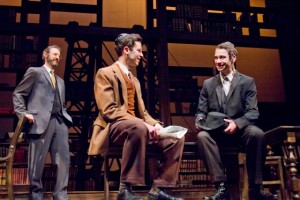 We follow the two boys as they grow out of their teen years and enter college; at the same time the Second World War comes to a close and the immense destruction of the Holocaust becomes known, a time period of terrible suffering for the Jewish community. The two actors who play the young friends, and the actors who portray their fathers, make up a perfectly balanced quartet, bringing Potok’s wise and insightful story to full realization. 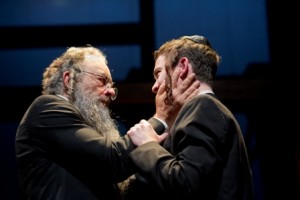 delineates the changing locations as the action unfolds. James Sugg designed the sound, and Raham also designed the costumes, achieving a completely authentic look for the characters.

Chaim Potok’s beloved novel still has an important message for us, and that message is well-served by this production, excellent in every aspect.

The Chosen runs through August 3. For tickets, visit www.barringtonstageco.org or call 413.236.8888.

This entry was posted in Theater, Uncategorized. Bookmark the permalink.