Captivating production of Kiss Me, Kate now on stage at Barrington Stage Company

Music and lyrics by Cole Porter

Book by Bella and Sam Spewack

Through July 12 at the Boyd-Quinson Mainstage at Barrington Stage Company in Pittsfield, MA

“Another Op’nin’, Another Show,” the first crackerjack production number in Kiss Me, Kate, takes us to a theater in Baltimore circa 1948, where backstage is abuzz with actors and dancers arriving, racks of costumes being rolled into place, and clipboards being checked. With spectacular dancing and superb vocal performances, it’s a dazzling beginning for Cole Porter’s most successful musical. This Barrington Stage Company (BSC) production is joyful, jubilant theatrical magic from the opening number to the final bow.

impresario, leading a company of performers in an exuberant musical version of Shakespeare’s “The Taming of the Shrew.” He plays Petruchio and has cast his ex-wife, Lilli Vanessi (a magnificent performance by Elizabeth Stanley), as his leading lady, Kate, even though their divorce is hardly amicable. Their highly dramatic sparring and bickering (in spite of the obvious fact that they still love each other) is the source of much of the humor and conflict in the plot, when they are portraying Petruchio and Kate as well as when they are the actors Fred and Lilli. Their voices sound magnificent together, making their duets outstanding.

The second sparring couple featured in the plot is equally well-cast. Mara Davi is 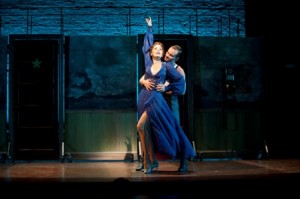 luminous as the actress Lois Lane, who plays Bianca in “Shrew,” well-matched with Tyler Hanes as Bill Calhoun, cast as Lucentio. Her rendition of “Why Can’t You Behave” is compelling – and the couple make a fabulous pair in their dance numbers as well.

Carlos Lopez and Michael Dean Morgan are hilarious as Damon Runyon-style gangsters who arrive backstage, intent on collecting a gambling IOU. They end up slamming across a wickedly funny rendition of “Brush Up Your Shakespeare,” Porter’s tips on using the Bard to woo their lady friends. 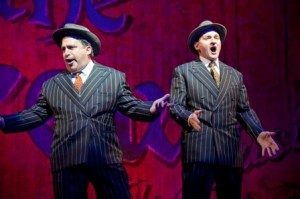 Joe Calarco has created a beautifully balanced production, highlighting the bawdy nature of a lot of the jokes, the witty Cole Porter lyrics, and the inherent humor of Shakespeare’s “Taming of the Shrew,” transformed into a musical within a musical.

Darren R. Cohen, the music director, leads a large and accomplished orchestra, which fills the theater with the lush music – and everyone in the cast sings so well. It’s a pleasure to hear these terrific Cole Porter songs performed so magnificently. From the torch song “Why Can’t You Behave,” to the soaring ballad ‘Wunderbar,” to the hilarious “ I Hate Men,” every song is memorable. 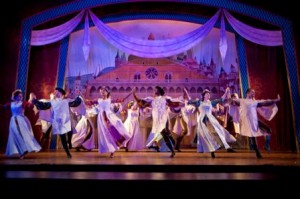 The cast of Kiss Me, Kate at Barrington Stage Company. Photo by Kevin Sprague.

The second act begins in the alley behind the theater, where the actors and crew are taking a break during intermission. Paul, played superbly by Matthew Bauman, sings the Cole Porter classic “Too Darn Hot” with a fresh, smart approach matched by terrific choreography performed by Bauman and the whole company. The sizzling dance moves are breathtaking; Lorin Latarro has created dances that work beautifully for the 1948 setting of the show and feel modern and fresh at the same time.

Audiences at Barrington Stage Company have come to expect musicals with accomplished casts and superb production values. This summer, the BSC team has done it again, presenting a spectacular Kiss Me, Katethat is entertaining and engaging in every way. 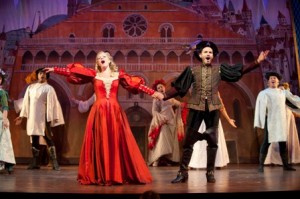 For more information, call the Barrington Stage Box Office at 413-236-8888 (or toll-free at 855-TIX-2BSC) or visit www.barringtonstageco.org.