It’s a Wonderful Life: A Live Radio Play is a holiday delight at Shakespeare & Company 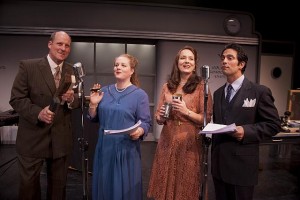 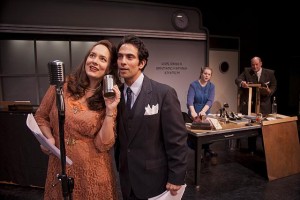 It’s a Wonderful Life: A Live Radio Play is utterly charming, a rendition of the familiar film story delivered with heart and humor and no small amount of skill. The cast of five seamlessly portrays about 50 characters, from a curmudgeonly miser to a guardian angel to a snarky New Yorker, without costume changes and without a moment of confusion for the audience. And as happens so often at Shakespeare & Company when the cast includes long-time company members, they make it look effortless.

The show is set in a New York City broadcasting studio on Christmas Eve in 1946. Every detail is spot-on, from the APPLAUSE signs that light up to the authentic microphones, a xylophone and a piano, and two tables of unusual objects used to create the sound effects. The audience meets the cast of The Jack Halloway Show as they prepare to perform the “Fireside Family Christmas” with holiday music and the Jack Halloway Players’ presentation of It’s a Wonderful Life on the radio.

The actors, in character as the 1940s radio personalities, mingle and mill about on the stage, greeting the audience and sorting out their scripts. A minor crisis ensues when the sound effects man can’t make it to the studio, but the actors quickly divide up the sound cues and the show begins.

David Joseph delivers a stellar performance as Jack Halloway, a smooth and sophisticated star of the airwaves, who plays the role of the earnest George Bailey in the radio play. He starts the “broadcast” with a rendition of “The Christmas Song” followed by applause from the audience as prompted by the flashing signs, just one of several songs interspersed through the evening.

Once they start acting It’s a Wonderful Life, the actors do a marvelous job of recreating the familiar film storyline: George Bailey is despondent over a business failure and Clarence Oddbody, his guardian angel, arrives on assignment from heaven to help George realize that he is not a failure, but has actually had a wonderful life.

Director Jenna Ware gives the audience a very special experience – the sentimental story of George Bailey and the residents of Bedford Falls, with all their triumphs and tribulations, is portrayed with warmth and authenticity, but at the same time, we have all the fun of a wonderful behind-the-scenes look at the actors broadcasting a radio show with the creation of the sound effects an entertaining, often humorous, bonus. The superb direction and the expertise of the cast are apparent at every moment – and the telling of the story of It’s a Wonderful Life is every bit as heart-tugging as the classic movie version, enhanced by the added dimension of the 1940s radio performers having to change character, play the music, add the sound effects, and even deliver commercial announcements. It’s an extraordinary evening of theater without doubt.

As radio actor Lionel Harrison, Jonathan Croy looks like he stepped right out of the 1940s. But once he starts assuming the roles of Joseph the narrator, Mr. Gower, Uncle Billy, Mr. Potter, Ernie, Nick, and many more characters, he is extraordinary in the ease with which he slides from one to the next, from angelic voice of reason to curmudgeonly miser to addled elder to a small boy. It’s an impressive and effective set of performances. The same can be said of the very talented Ryan Winkles, who plays radio star Harry “Jazzbo” Heywood as well as Clarence the guardian angel, Harry Bailey, Sam Wainwright, and more. Jennie M. Jadow gives us all the female characters, from little Zuzu to Violet, the town hussy, imbuing each with a spirit and charm – Jadow is particularly good at creating wonderful, expressive voices for the various characters.

It’s a Wonderful Life, indeed, at Shakespeare & Company, with this very successful holiday offering. It’s a delight from beginning to end.