Shakespeare & Company presents None but the Lonely Heart, an innovative evening of theater and music 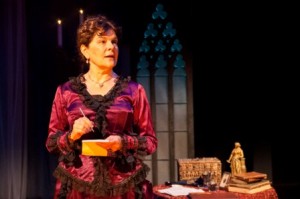 None But The Lonely Heart: The Strange Story of Tchaikovsky and Madame von Meck

[Lenox, MA] — In None but the Lonely Heart, a successful hybrid of chamber concert and theater, the unusual epistolary relationship between Tchaikovsky and his wealthy patroness is illuminated and amplified through the great composer’s own music and words. Shakespeare & Company is presenting this production of New York’s Ensemble 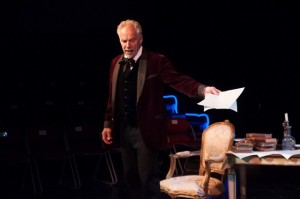 for the Romantic Century, which features two accomplished actors, Jonathan Epstein and Ariel Bock, joined on stage by three superb musicians as well as a tenor and a ballet dancer, which makes for an exceptionally rich and satisfying evening of music and drama.

Eve Wolf, the founder and executive artistic director of the Ensemble for the Romantic Century, is the playwright and the pianist for None but the Lonely Heart. Her spirited, engaging performance of Tchaikovsky’s Piano Trio in A Minor, the central musical work of the evening, is one of the compelling elements of this production. Joined by violinist Susie Park and cellist Adrian 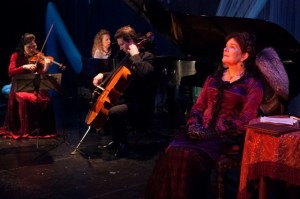 Daurov, the trio also performs Nocturne for cello and piano and Scherzo for violin and piano. The evening also includes tenor Edwin Vega singing some of Tchaikovsky’s moving songs. The musicians are excellent, and hearing Tchaikovsky’s passionate compositions in this very intimate theater is a special opportunity indeed.

Pyotr Ilyich Tchaikovsky (1840-1893) and Nadezhda Filaretovna von Meck (1831-1894), a rich widow, developed and maintained a complex relationship over the course of 13 years – by the exchange of frequent, sometimes daily, letters. They went to great lengths to avoid meeting in person, and indeed, they never did meet or speak to each other. She was his devoted 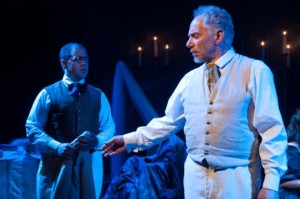 patron, supporting him financially for many years, and he was duly grateful. But the relationship was deeper than that, as they shared intimate thoughts and feelings as well as details of their lives in their frequent letters.

This fascinating relationship is explored in None but the Lonely Heartby Jonathan Epstein and Ariel Bock, who deliver dialogue culled, for the most part, from the notes and letters of the two correspondents. Epstein is controlled, subtle, and charismatic as the somewhat reclusive composer, conflicted about his work and the homosexual tendencies he strove to conceal; Bock is warm and understanding as his confidante. They balance each other beautifully, embodying the two complex characters. These excellent performances are well worth seeing, especially when they are paired with the marvelous chamber music that is a part of this innovative production.

Director Daniel T. Sanders has done a masterful job of weaving all the elements of this unusual production together into a well-balanced, well-paced, and compelling evening. Even the inclusion of ballet dancer Daniel Mattei, whose elegant presence and beautifully realized choreography add much to the experience, is accomplished seamlessly. The sophisticated simplicity of the set and the sumptuous costumes by Vanessa James, and the fine lighting by Beverly Emmons, add visual depth to the overall excellence of the production.

This entry was posted in Music, Theater. Bookmark the permalink.