Opening night at Tanglewood: Joshua Bell and the Boston Symphony Orchestra in an all-Tchaikovsky program 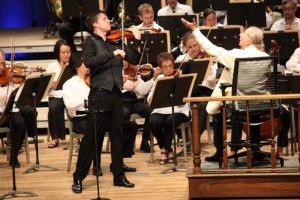 There was a marvelous display of musical pyrotechnics on stage at Tanglewood on Friday evening, July 5, when Joshua Bell and the Boston Symphony Orchestra performed an opening night all-Tchaikovsky program in the Koussevitzky Music Shed. Bell offered a dazzling performance of Tchaikovsky’s Violin Concerto in D with Rafael Fruhbeck de Burgos on the podium, who then led the orchestra in a powerful Symphony No. 5.

It was a hot evening with an uncomfortably high dew point, but the Shed and lawn were packed with enthusiastic patrons; the orchestra was in shirtsleeves and Bell, performing at Tanglewood for the 25th consecutive season, performed in his signature black shirt and vest. 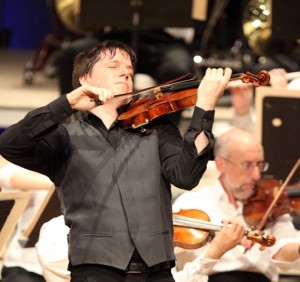 Joshua Bell’s performance was focused and compelling. He created lovely contrasts between delicate, melodic passages and the whirling-dervish-like passages of cascading notes, all with tremendous passion and energy.

The concerto is an emotional piece, varied and lively. A notably difficult piece to play, Bell more than rose to the challenge, delivering a nuanced, beautifully calibrated performance, arcing from quiet, delicate moments to bold, commanding passages with the mastery of a mature performer.

The music begins plaintively, but Tchaikovsky penned a rich, lush, Russian-inflected concerto, covering vast emotional ground. Bell was magnificent, dazzling the audience with confidence. He plays boldly and with power. The recurring motifs are achingly beautiful, however difficult the composer’s life was when he wrote this music. According to the program notes (always illuminating), Tchaikovsky was fleeing a disastrous marriage and grappling with depression and confusion in his private life when he composed the violin concerto, and he did not consider it a success. Artists and audiences think differently, and the piece is often performed.

Tchaikovsky’s music is accessible, vastly entertaining, with a strong narrative sense. The second piece on the program, Tchaikovsky’s magnificent Symphony No. 5, doesn’t disappoint, and Fruhbeck de Burgos delivered a powerful performance – the orchestra was in fine form despite the sticky weather. The conductor led the orchestra with passion, often leaping to his feet. All in all, the BSO’s opening performance of the 2013 Tanglewood season was superb and bodes well for the rest of the summer.

For tickets and complete information about the Tanglewood season, visit www.tanglewood.org.