2012: The Shakespeare & Company production of Satchmo at the Waldorf is extraordinary, thrilling theater 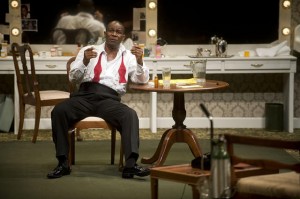 John Douglas Thompson delivers an extraordinary performance in Satchmo at the Waldorf, portraying three men: the aging Louis Armstrong, his bulldog of a manager Joe Glaser, and even the critical Miles Davis. “I got stories on top of stories,” says Armstrong in Terry Teachout’s brilliant play, and 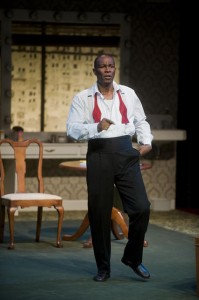 Toward the end of his life, Louis Armstrong (called by many the greatest jazz musician of the twentieth century) recorded hundreds of hours of conversations and anecdotes. This play is set in Armstrong’s dressing room at the Waldorf Astoria in New York in 1971, shortly before his death, and the reel-to-reel tape recorder is prominently placed on the set, providing the framework for Armstrong to begin relating his life story. Teachout is an expert on Louis Armstrong, having written the biography Pops: A Life of Louis Armstrong in 2009, and while this play is a work of fiction, Teachout based it on Armstrong and Glaser’s lives.

Satchmo offers a fascinating look at the music business in the first half of the twentieth century, told through the life experiences of this musical genius, from his 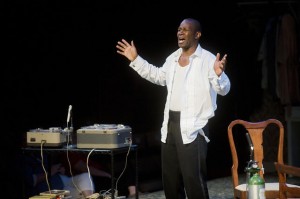 impoverished childhood in New Orleans to his years on the road during Jim Crow to his success, which surely came at a price. We learn about his four wives, about traveling in the segregated South, about dealing with gangsters, and about Armstrong’s passion for his music.

But this play is about a relationship, possibly the most important relationship in Armstrong’s life – the one he had for forty years with his manager, Joe Glaser. Thompson is a chameleon, shifting from Armstrong to Glaser and back again many times during the play – and it is always immediately clear which man is speaking. That Thompson plays bo 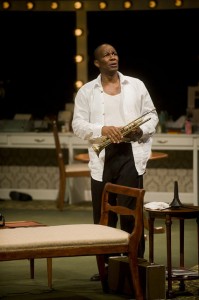 th Armstrong and Glaser – one actor giving us both sides of the relationship – is amazing, and in one scene he has a telephone conversation between the two men, seamlessly, convincingly. This is extraordinary acting.

Armstrong’s public persona was that of an optimistic, charming, smiling entertainer, but this play reveals a darker, more complex character. The challenges of race relations during Armstrong’s lifetime surely shaped the public face that Armstrong showed to his public, especially the white audiences who came to his nightclub performances. And between the characters of Armstrong and Glaser, they explain the successful strategy behind the marketing, the branding if you will, of Louis Armstrong. 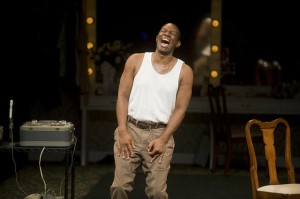 sion on mainstream programs like the Ed Sullivan Show, playing the accessible hits that made him wealthy, and he also shows us the Armstrong who used plenty of profanity, the womanizer, the angry Armstrong expressing his disgust over the travesty of segregation, and the dedicated musician who wondered why more black people didn’t come to hear his music.

Thompson’s portrayal of Glaser is riveting as well – the Jewish entrepreneur who handled the finances, the negoti 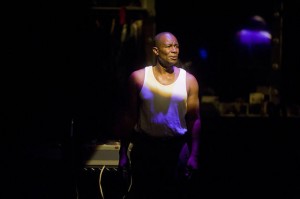 ations, and the packaging of the jazz star was a brash, hard-charging individual. Glaser made some hard decisions and in some ways tried to shield Armstrong in what was a tough business. The two men were very, very different, making Thompson’s performance all the more impressive.

The third character appears in just a few vignettes: Thompson plays Miles Davis, who accused Armstrong of pandering to the white audiences and selling out musically. 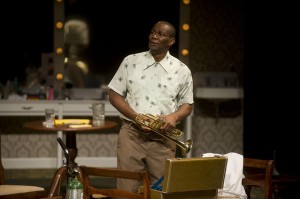 There are so many reasons to see this show – under the sure hand of Gordon Edelstein, the production is seamless. Edelstein is the artistic Director of the Long Wharf theatre in New Haven, Connecticut, and Satchmo will transfer there in the fall. Teachout has written a significant play, important in revealing the details of Armstrong’s story in this powerful way. But the main reason to make sure to see this exceptional show is to witness Thompson’s brilliant performance — it is an extraordinary artistic accomplishment.

Satchmo at the Waldorf runs approximately 90 minutes without an intermission.

Satchmo at the Waldorf plays through September 16. For tickets call 413.637.3353 or visit www.shakespeare.org.