The North Pool by Rajiv Joseph at Barrington Stage Company

With Remi Sandri as Dr. Danielson and Babak Tafti as Khadim

[Pittsfield, MA] — The taut, tense plot of Rajiv Joseph’s psychological thriller, The North Pool, is a fascinating one, full of surprising twists. The excellent production at Barrington Stage Company’s St. Germain Stage now through August 11 features a pair of powerful performances, with the two male characters, one a high school administrator and the other a student he has summoned for questioning, circling and stalking each other like modern-day gladiators, all in the space of one fraught hour of detention at a public high school.

This production is skillfully directed by Giovanna Sardelli, who has orchestrated a remarkably authentic dialogue between her two actors as well as creating real suspense for the series of revelations that constitutes the plot.

Remi Sandri is brilliant as vice-principal Danielson, well aware that he has the upper hand, having called Khadim, a recent transfer student, to his office 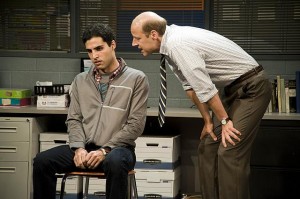 in the basement of the school at the beginning of spring break. Using well-honed interrogation skills, he shifts from his apparently sympathetic demeanor to that of an accuser and then back again, as he questions and berates. His performance is skillfully crafted, the ideal portrayal of a middle-aged man who is probably socially awkward in his own peer group but revels in his power over the teenagers under his jurisdiction. 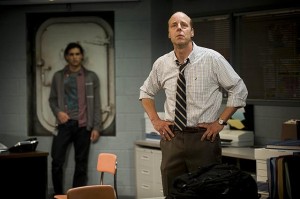 Babak Tafti is equally splendid as Khadim, the wealthy student with an international background who has landed at a public high school after his recent transfer from an exclusive prep school. He is handsome, clever, and wealthy, but he knows that his Arab descent could make him a victim of ethnic profiling. He is wary at first, knowing that the school is deserted, that faculty and students have left for spring break, and that his position in the vice-principal’s basement office is a precarious one. 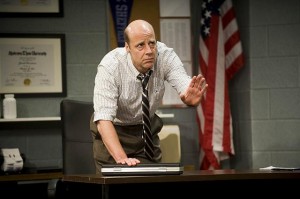 The set is excellent: an uncanny representation of an office in a typical high school, with cinder block walls painted institutional green, a row of lockers in the hallway, and a large world map covering one wall. The action begins with Khadim appearing in Dr. Danielson’s office; the awkward conversation includes some initial pleasantries, but it’s clear that the vice-principal has an agenda and he is going to keep that hidden from Khadim for as long as possible. The two dodge and dance around the truth as one surprise after another is revealed. These two strong actors are very well-balanced in their roles, seamlessly presenting the administrator and the student in a back-and-forth that reveals the complexity of their personalities. 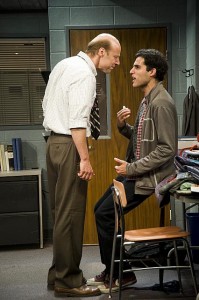 The unfolding of the plot is an important part of the experience, so there will be no spoilers here. That Rajiv Joseph is a masterful playwright is amply demonstrated in this elegant, brilliantly constructed cat-and-mouse game, and this artful production serves the play beautifully.