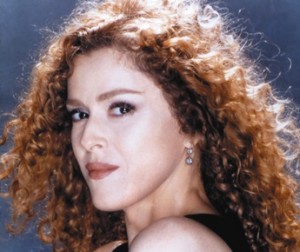 A sunny afternoon, the Boston Pops, and the extraordinary Bernadette Peters combined for a perfect Tanglewood afternoon. Sunday’s concert, the first Boston Pops performance of the 75th Tanglewood anniversary season, began with a varied musical salute to the city of New York, followed by a set of marvelous songs performed by the incomparable Peters (she included a generous selection of tunes by Stephen Sondheim), and finished with the Pops’ signature march, Sousa’s Stars and Stripes Together.

The Boston Pops, conducted by Keith Lockhart, opened with John Williams’s Liberty Fanfare, composed in 1986 for the 100th anniversary of the Statue of Liberty. The bold piece showcases the brass section, features a big and varied percussion presence and also includes a lovely melodic section; it was a perfect start to the afternoon’s proceedings and the Pops Orchestra was in fine form.

Keith Lockhart welcomed the audience and explained that the first half of the concert was a tribute to New York City: then he introduced the second selection, a terrific arrangement of 42nd Street, the tune from the film of the same name, with music by Harry Warren and a marvelous arrangement by Don Sebesky. The orchestration is huge, a brash celebration of the song, with a distinct swing/jazz flavor. There is a wonderful tuba solo, very engaging percussion, big sound from the brass, and a spectacular saxophone solo. This number was just a lot of fun.

The next selection changed the mood; the orchestra played Taxi Driver: A Night-Piece for Orchestra, composed by Bernard Herrmann, well-known for his long collaboration with Alfred Hitchcock. This piece was written for the Martin Scorsese film, of course, and this iconic score reflects the seaminess and isolation portrayed in the film. The movements named in the program are Prelude, Blues, Night Prowl, Bloodbath, and Finale. The bluesy, soulful passages were played magnificently by the orchestra, and Michael Monaghan contributed a haunting, memorable saxophone solo. 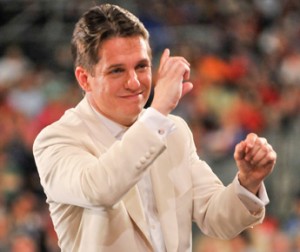 The last work in the New York tribute was Harlem, written in 1950 by Duke Ellington. The composition takes the listener on a tour of Harlem, starting with the blues, moving into jazz, then a section of Latin tone and tempo, going right into a powerful big band swing moment. We heard strains of a Dixieland funeral, then a late evening at a night club, and even a fragment of gospel. Ellington included all the facets of the personality of mid-century Harlem blended into a masterful whole. There was a wonderful trombone solo, as well as excellent work in the percussion and woodwinds.

The Boston Pops, dressed in white on a warm afternoon, were superb. They play with precision as well as with great energy; the way the sound fills the Shed is just glorious.

After the intermission, Lockhart lost no time in introducing Bernadette Peters, the Tony Award-winning performer who has had great success not just on Broadway and on the concert stage but in film, on television, and most recently as the author of children’s books. Peters’s first number was “Let Me Entertain You” from the musical Gypsy, by Jule Styne and Stephen Sondheim. Peters was wearing a slim, spangly purple gown and she looked gorgeous. “I always dress like this in the afternoon,” she joked. She is tiny, but has tremendous stage presence, completely confident and at ease. Her second number was the haunting ballad “No One Is Alone” from Into the Woods, a Stephen Sondheim musical, and she sang it simply, effectively, beautifully.

Peters is a very accomplished singer – her voice is distinctive, recognizable, rich and warm in tone, and she is very much a storyteller. Her next selection was the humorous “There Is Nothing Like A Dame” from South Pacific, by Richard Rodgers and Oscar Hammerstein, which she delivered with a light-hearted sexiness.

Performing, as she said, for the first time the classic torch song, “Fever,” Peters gracefully perched on the big Steinway, where a black velvet pillow had been placed. Her interpretation of this song was alluring and sophisticated. Peters brought a trio of musicians with her: Marvin Laird on piano, Cubby O’Brien (yes, the former Mouseketeer!) on drums, and Mike Rivard on bass. She also sang with the whole Pops orchestra – the next song was also from South Pacific, a lush, gorgeous rendition of “Some Enchanted Evening,” romantic and with some interesting choices in the phrasing. Tamara Smirnova, Pops concertmaster, added a beautiful violin solo.

Peters is well-known as a superb interpreter of the songs of Stephen Sondheim, and she offered two from Follies; she recently starred in a revival of the show in New York, playing Sally Durant Plummer. On Sunday afternoon, she sang “In Buddy’s Eyes” which was lovely, and then the heartbreaking ballad, “Losing My Mind.”

Beginning with a majestic orchestral treatment, the next song was the poignant “Johanna,” from Sweeney Todd, also by Sondheim, and then the last Sondheim song of the concert was the showstopping “Being Alive” from Company. Peters is a compelling performer, completely engaging the audience. Her encore was a lullaby titled “Kramer’s Song,” named after her dog and part of a benefit for the Broadway Barks organization, a charity that helps shelter animals. Peters wrote the music and lyrics herself to go with the first of two children’s books, “Broadway Barks,” she has penned about shelter animals, and all proceeds go to the charity.

The Boston Pops ended the afternoon with a rousing performance of their signature tune, “Stars and Stripes Forever,” by John Philip Sousa, which happens to be the official march of the United States.

All in all, it was a memorable concert, with a stellar performance by Bernadette Peters paired with the wonderful Boston Pops. The summer season, the 75th anniversary year for Tanglewood, is off to a terrific start!