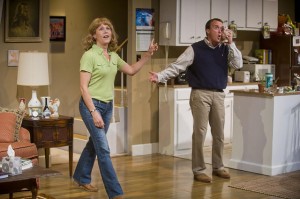 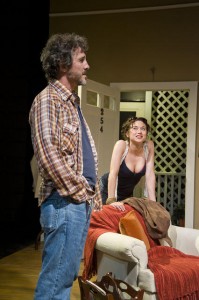 [Lenox, MA] — “In one family you can have five different versions of the same story, and every person is affected by it five different ways,” says one of the characters in Parasite Drag, Mark Roberts’ dangerous drama about devastating family secrets. The play is both very funny and tragically sad, revolving around two estranged brothers, brought up in the same dysfunctional environment, who are as different as two men can be. Stephen Rothman, directing for the first time at Shakespeare & Company, has crafted an impeccably paced, balanced production filled with exceptional performances from the skilled cast. Roberts’ insightful script is full of tack-sharp dialogue that is outrageously funny, powerful, and provocative. This play is for adults only; there is plenty of profanity and adult content. 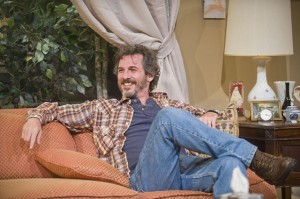 As the play opens there is a tornado brewing outside and a simmering argument inside. The tense atmosphere of Joellen and Gene’s arid home in Illinois is broken by the unexpected arrival of Gene’s older brother Ronnie and Ronnie’s new wife, Susie, a visit precipitated by the hospitalization of their troubled sister.

The ensemble cast works beautifully: Josh Aaron McCabe is brilliant as Gene, unlikable and controlling at first, allowing his guard to drop in increments as the plot unfolds. Elizabeth Aspenlieder is riveting as Joellen, the desperately lonely wife, armed with an attitude. We understand their frustration as we listen to their opening conversation: this is a long marriage, a longer relationship, and the pattern of the argument is clearly an all-too-familiar one. 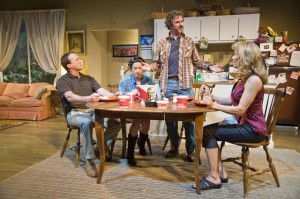 Gene has wrapped himself in a rigid, dry Christianity, persuading himself that the appearance of forgiveness will erase the sins of the past. Ronnie, Gene’s older brother, has done the opposite; he “acts out” and says exactly what he thinks, with all the embellishments of a lusty, vulgar, and attention-getting vocabulary of swear words.

Jason Asprey is excellent as the outrageous but charming Ronnie, his snarky humor masking his hard edges. And Kate Abbruzzese is marvelously grounded and appealing as Susie, the youngest of the four but possibly the most sensible. 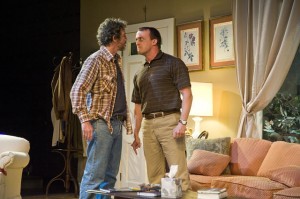 As the two brothers try to communicate, long-hidden family secrets spill in an avalanche of anger. There’s a lengthy list of off-limit topics going back to their early childhood, and with every new revelation, the wounds and scars that make the brothers behave as they do come more and more into focus. Ronnie and Gene appear to be irretrievably estranged, but the truth is that they are connected in complex and profound ways, because of the shattering events in their past.

Everything about this production makes it clear that from the writing to the direction to the superb performances, close observation of the human condition has been taken into consideration. This feels real, authentic, and painful. We identify with these characters, even with a character we never actually meet – a character who, as it turns out, is the core of the story. 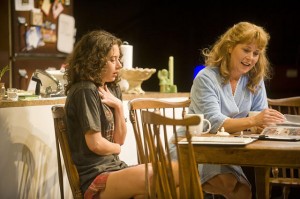 Anyone who is part of a family or a marriage will recognize something in this play that resonates. Some of us, unfortunately, will recognize a lot. Just remember to breathe.