The Best of Enemies

[Pittsfield, Mass.]—In 1971, when C.P. Ellis, a Ku Klux Klan member, and Ann Atwater, an African-American community activist, were asked to work together to help integrate the Durham, North Carolina, public schools, it was doubtful the two could be civil to each other, but in an extraordinary turn of events, they became lifelong friends. Mark St. Germain’s riveting new play, at the Barrington Stage Company Mainstage now through August 6, tells the true story of this remarkable relationship in an excellent production notable for the superb performances of Aisha Hinds and John Bedford Lloyd as Atwater and Ellis, under the creative and insightful direction of Julianne Boyd. 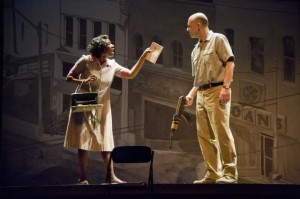 haracters; C.P. Ellis was an Exalted Cyclops in the Ku Klux Klan, and the scene of him leading a meeting includes some shocking language. Ann Atwater was sometimes called “Roughhouse Annie” for her direct, demanding, and determined methods of advocating for her friends and neighbors.

When community organizer Bill Riddick is charged with forming a committee to facilitate the court-ordered school desegregation, he persuades Ellis and Atwater to act as co-chairs, something they initially refuse to do. Riddick persevered, and as they worked together, they slowly began to see each other differently.

Aisha Hinds is a powerhouse 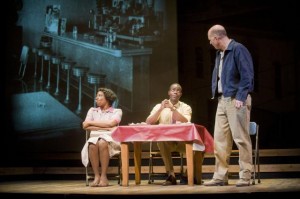 as Atwater, delivering a performance that starts in strength and adds compassion and heart as the play unfolds. She is simply wonderful in this important role. John Bedford Lloyd is equally effective in his beautifully crafted performance, portraying a character who is at first far from sympathetic, but gradually reveals his humanity.

The part of Bill Riddick is well-played with humor and compassion by Clifton Duncan, and Susan Wands is genuine and affecting as Ellis’s wife, Mary.

Mark St. Germain has done an exceptional job of telling this unusual and co 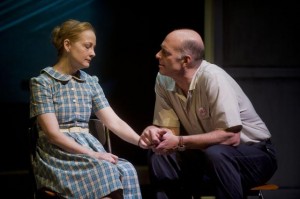 mpelling story of an unexpected friendship, a story about change and growth and ultimately, redemption. The production marks the world premiere of the play, which was suggested by the book The Best of Enemies by Osha Gray Davidson. This is an important play, not just for what it says about race and class relations in this country, but for what we can learn about compromise and understanding from the example of Ann Atwater and C.P. Ellis, two very unlikely friends. 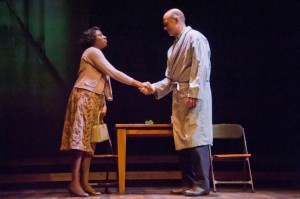 Barrington Stage Company is at 30 Union St., Pittsfield, Mass. For tickets and information, call the box office at 413.236.8888 or visit www.barringtonstageco.org.