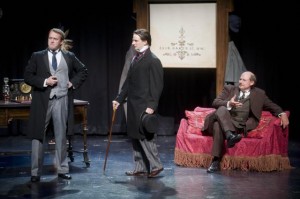 The Hound of the Baskervilles

By Steven Canny and John Nicholson

[Lenox, Mass.]—The new Shakespeare & Company production of The Hound of the Baskervilles, a wacky adaptation by Steven Canny and John Nicholson of the classic Sherlock Holmes story, is laugh-out-loud funny from beginning to end. A deft directing job by Tony Simotes and terrific performances from Jonathan Croy, Josh Aaron McCabe, and Ryan Winkles had the audience howling with laughter. The Hound of the Baskervilles plays in Founders’ Theatre through September 4.

The three actors—aided and abetted by clever costumes, inventive props, an assortment of accents, and an amazing amount of energy—play sixteen roles in the side-splittingly funny production.

Shakespeare & Company presented the American premiere of The Hound 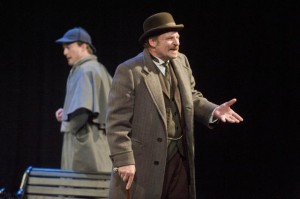 of the Baskervilles, based on the story by Sir Arthur Conan Doyle, back in the fall of 2009 in the Elayne P. Bernstein Theatre, and it was a big success; Simotes directed Croy, McCabe, and Winkles in the earlier version, too.

The male heirs of the Baskerville family are killed, one generation after next, by a terrifying spectral hound on t 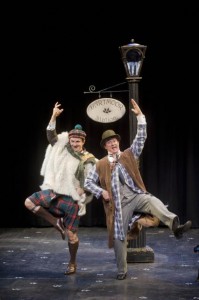 he moors near their ancestral estate, Baskerville Hall. The great detective Sherlock Holmes sends his trusted sidekick Dr. Watson to the Baskerville’s country estate to investigate the murders and to protect Sir Henry Baskerville, the new heir to the title, and mayhem of all kinds ensues.

Jonathan Croy plays just one role: Dr. John Watson, and he does it admirably. Watson lacks the intellect that Holmes brags about, but more than makes up for his lack of smarts by shooting off his revolver at every opportunity. Croy is a bit goofy as the bumbling sideman, a bit bemused by the extraordinary hijinks taking place around him. Croy has marvelous comic timing and a knack for 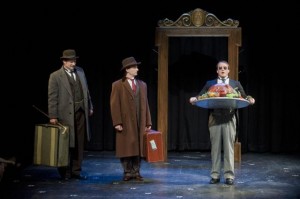 the deadpan expression and physical comedy.

The chameleon-like Josh Aaron McCabe portrays, with authority and enormous hubris, Sherlock Holmes himself, complete with deerstalker cap, a hand-held magnifying glass, a caped overcoat, and a large Meerschaum pipe. He also plays the mysterious Stapleton, complete with eyepa 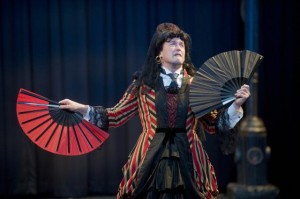 tch and crutch, who lives on the moor near the Baskerville estate; Stapleton’s oh-so-fetching sister Cecile, in mantilla and flounced skirt, snapping fans punctuating her alluring tango moves; Barrymore, the enigmatic blind butler; Mrs. Barrymore, the sobbing housekeeper, and a yokel from the countryside. It’s a breathtaking performance. 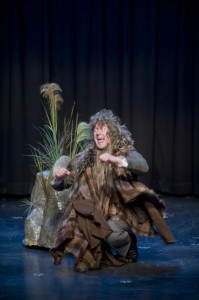 Ryan Winkles is more than a match for the other two: he plays the winsome and charming Sir Henry Baskerville, who becomes quite smitten with the lovely Cecile; the forbidding Dr. Mortimer, a baffling Cockney cabdriver, and several yokels.

Physical humor, slapstick, and sight gags abound; there is a wickedly funny visual joke with towels, a hilarious sequence that takes place in a swamp called the Great Grimpen Mire, a running gag about farm animals in burlap sacks, and Watson’s ongoing correspondence with Holmes. If you miss any of the story line, not to worry; the cast opens the second act with a lightning-fast reprise of the earlier scenes.

There are a lot of silly gags in this show, but make no mistake; this is a well-crafted, tightly calibrated, and polished production performed by very skilled actors, under the leadership of an innovative director. For a very satisfying evening of comedy, this show is a must-see. It was a success two years ago, and in its new incarnation in the Founders’ Theatre, it is destined to be a hit again. The game is afoot!