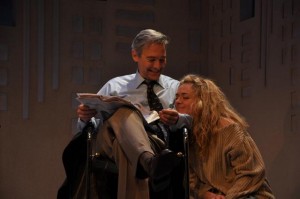 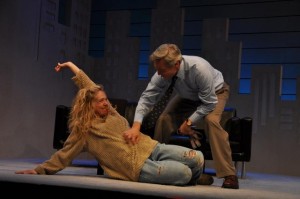 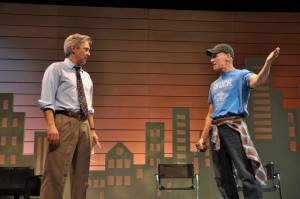 furniture and a cutout city skyline as the backdrop; their children are in college and they have moved back downtown. Greg, winningly played by David Adkins, has lost interest in his career in the financial world and is drifting, but Kate’s teaching job is challenging, she is finally gaining some recognition, and she is enjoying the advantages of an urban lifestyle. Kate (a finely balanced performance by Jurian Hughes) is very pleased with the way her life is going, until she comes home from work to find Sylvia ensconced in their apartment and already bonded with Greg; Kate tries to veto the acquisition of a dog but fails when Greg and Sylvia join forc 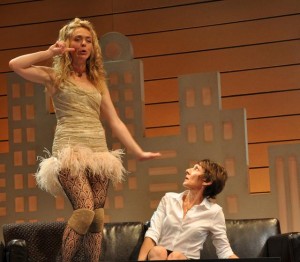 Rachel Bay Jones is hilarious as Sylvia; her dog mannerisms are just right, from the worshipful gaze she turns on Greg to her reaction when she sees a cat on the street. As Sylvia she is charming, endearing, full of energy, and a bit of a smart-aleck. Sylvia converses with Greg and Kate, but her performance, in fact all the performances, are so good, that we really buy into the notion that this is a dog and her owners. 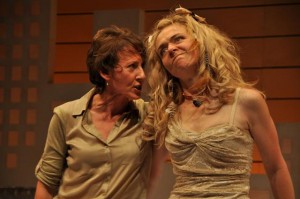 Several scenes take place in the park, where Greg falls into conversation with Tom, another middle-aged male dog owner (the first of three characters deftly played by the chameleon-like Walter Hudson), who analyzes Greg’s situation at home quite adroitly: when career and marriage have lost the excitement, a man can always turn to his loyal canine pal. Hudson, who possesses superb comic timing, also plays Phyllis, Kate’s socialite friend, and Leslie, a flamboyant marriage counselor. 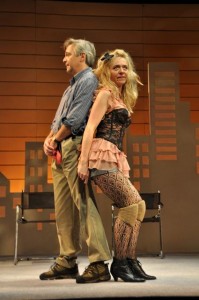 This play, especially as directed by the gifted Cato, works on several levels. It’s very funny; the premise of a dog who, armed with nothing but charm and unconditional love, takes over a household is one that is bound to be familiar to pet-owners, and Bay Jones’s performance is a hoot—it works so well as comedy because she really makes the audience believe in Sylvia and in the relationship between Sylvia and Greg. Adkins, as the lost and dissatisfied Greg, brings a poignant sadness to the proceedings when he talks about the career that used to be meaningful, and a lovely, and real, sense of joy and delight in his interactions with Sylvia. Hughes delivers a finely calibrated performance as the no-nonsense schoolteacher Kate, who is finally coming into her own. 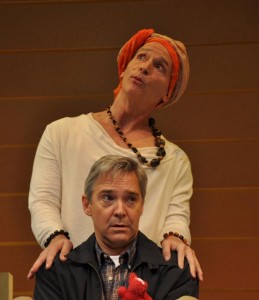 Greg is clearly besotted, Sylvia is endearing, and Kate has a hard time competing in this fascinating, and laugh-out-loud funny, love triangle. Move this production to the top of the must-see list; it’s a marvelous evening of theater.