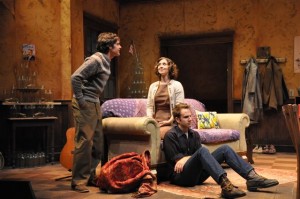 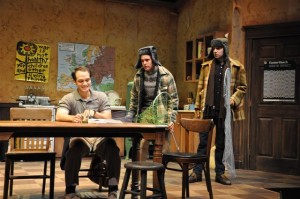 [STOCKBRIDGE, Mass.]—Michael Weller’s Moonchildren follows a group of college students through their last bittersweet year of school, all the more poignant for taking place in 1965 and 1966, in the shadow of the war in Vietnam. The Berkshire Theatre Festival production, featuring Karen Allen’s deft direction of a fine cast, runs in the Unicorn Theatre through July 16. 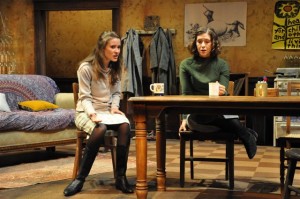 The entire play unfolds in the one large space that serves the roommates as living room, dining area, and kitchen. The apartment, from the dingy, faded-beyond-recognition wallpaper to the outdated (even for 1965) refrigerator to the worn beige settee draped in the ubiquitous Indian-print bedspread of the sixties, is eerily familiar; how many of us lived in very similar digs in our college years? Most, judging by the murmurs of recognition from the audience. 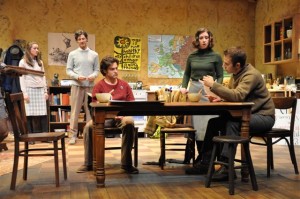 The shifting relationships between the seven roommates, five boys and two girls, who occupy the attic apartment during their senior year at an unnamed college in the Northeast, constitute most of the story; they go to an antiwar march, worry about their grades, and yearn to be “relevant,” somehow, as they approach graduation. 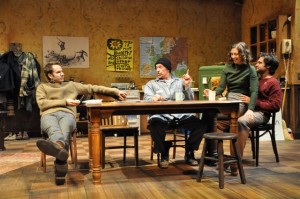 worried about something; his girlfriend Kathy (an affecting performance by Norma Kuhling) is concerned, but she is also annoyed that Bob is not confiding in her. Bob insists he is fine, but the others soon discover that he has been summoned to the draft board for a physical, reason enough to be uneasy.

Moonchildren is a generous blend of comedy and drama; the earlier scenes are very funny indeed, but as their graduation approaches, the characters take a more serious tone. And of course, if there is a war being waged and an active draft, then those post-graduation decisions become very important. The fear of losing the all-important college deferment propelled many a reluctant student into graduate school. 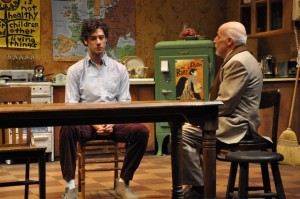 Norman, played by Carter Gill, is all tics and quirks and social ineptitude; he’s the nerd who reads instead of interacting, until he takes one significant, shocking step to be “relevant.” Samantha Reichert is charming as Norman’s ditsy girlfriend; she doesn’t actually live in the apartment, but spends a good deal of time under the table. 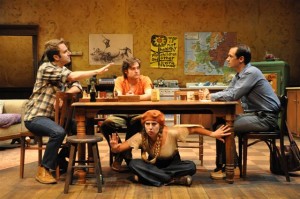 Miriam Silverman is strong and grounded as Ruth, the capable, unflappable girl who acts as housemother, making sandwiches, watching over the boys like Wendy in Peter Pan. Her boyfriend, Mike (Joe Paulik in a lively, engaging, charming turn), is the guy with all the charisma and leadership ability who spends his time on elaborate jokes; and Matt Harrington is spot-on as Mel, called Cootie, a sort of sidekick to Mike, but with his own sly brand of charm. 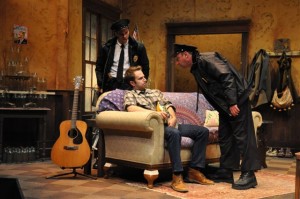 Dick, the boy who doesn’t mind poaching the girlfriend of one of his roommates, is well-played by Aaron Costa Ganis, who brings real presence to this rather abrasive and not completely likable character.

Allen has succeeded beautifully in balancing her cast and creating a very natural rhythm in the interactions; there is an ease and a flow to the way the roommates connect, even when there are conflicts. 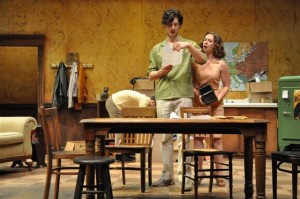 It’s a world of the young, all peers, all of an age, so when someone of a different generation enters the apartment, they exist outside the circle of the students: the quirky landlord, who recounts a fascinating dream that gives the play its title; an irascible neighbor who alternates between yelling at the students and inviting them to come and hang out with him; the two policemen who arrive to warn them not to “parade around bare-assed.” 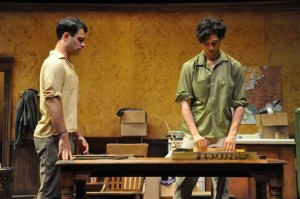 The roommates start the year as friends. “Aren’t we all in here together?” someone asks more than once, but by the end of the year, and the play, a lot of those relationships have changed or ended. Most leave, suitcases in hand, juggling cardboard cartons of belongings, without saying goodbye to the others.

Moonchildren gives us the opportunity to look back with a sense of nostalgia and the benefit of hindsight at what it was like to come of age during the Vietnam War, when so 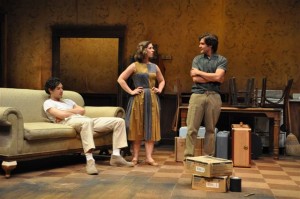 much was at stake. Karen Allen’s tender production of Weller’s seminal work is a period piece, but the difficult transition to adulthood is no easier now than it was forty-odd years ago, making this play, and this production, just about timeless and as relevant as ever.

The Berkshire Theatre Festival production of Moonchildren runs through July 16 in the Unicorn Theatre, 6 East St., Stockbridge, Mass. For more information, visit www.berkshiretheatre.org; for tickets, call the box office at 413.298.5576.