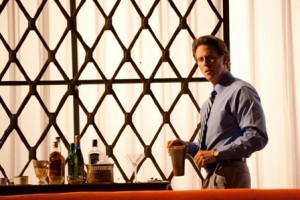 The play begins in an elegant hotel room in Tangier, Morocco; titled “The Halt & the Lame,” part one introduces us to Ken Hoyle, an upper-level executive for an international corporation that sells substandard baby formula in poor African countries, using manipulative and dishonest sales techniques. Hoyle is tasked with firing employees who are no longer useful, and he boasts that he’s very good at it. The trick, he says, is to do it quickly. “They go quietly when I do it,” he says. Weber’s portrayal is nuanced, beautifully calibrated, and persuasive: his Hoyle speaks directly, companionably, to the audience, explaining his job in a calm manner, even when he likens the firing process to “railroad tracks to the ovens.”

This Hoyle is smooth, suave, polished, and reprehensible. Only when he m

entions his wife do we see a chink in the heavy corporate armor, a hint of sensitivity, even though there is clearly tension in their relationship.

Part two, called “Be Careful,” is set in a hotel in St. Thomas, Virgin Islands. Maura Tierney as corporate wife Barbara Hoyle comes out onto the lanai with freshly washed hair, comfortable in a white blouse and jeans. Her monologue touches on their long-ago stint in the Peace Corps and her now-abandoned photography career, before describing a speech she has just given to other corporate wives, a talk intended to help the other women cope with life in the foreign countries where the company does business. Tierney’s performance is magnificent; she appears to be a competent, controlled, do-the-right-thing corporate spouse, until her elaborate façade starts to slip and reveal some of the hard truths about what her life has become, some of the rage that she can’t escape. 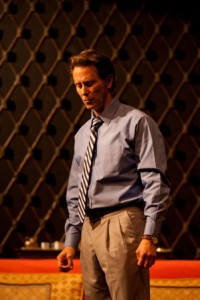 e Day of the Dead” and this time the hotel room, quite simple, obviously much less expensive than the first two rooms, is located in Oaxaca, Mexico. Weber delivers the third and final monologue, continuing the narrative. The play is beautifully written; the audience members learn everything they need to know about the two characters just from the powerful narrative; and the relationship between the husband and wife is very clear without us ever seeing them together.

The visual elements of the production are marvelous, from the elegant hotel rooms to the perfect lighting to well-chosen costumes and musical elements.

The subject matter of Three Hotels resonates, touching as it does on personal responsibility, loyalty, having to make compromise after compromise until ethics are twisted beyond recognition, and the lengths people will go to for money and success. This is a compelling production, and Weber and Tierney deliver superb perfor 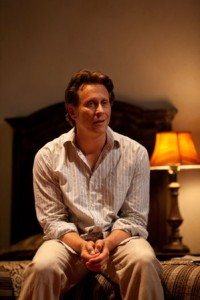 Three Hotels is performed without an intermission.

The Williamstown Theatre Festival Main Stage is at 1000 Main St., Williamstown, Mass. For more information visit www.wtfestival.org and for tickets, call the box office at 413.597.3400.