A riveting production of the two-character drama Going to St. Ives is now at Barrington Stage Company 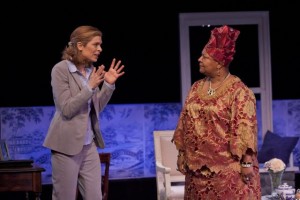 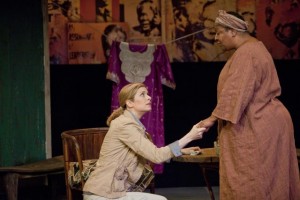 [PITTSFIELD, Mass.]—Lee Blessing’s gripping psychological drama Going to St. Ives is being given a passionate, powerful production, skillfully directed by Tyler Marchant, at Barrington Stage Company’s Stage 2, now through July 9. Gretchen Egolf and Myra Lucretia Taylor deliver compelling performances as two women who would seem to have little in common but find themselves sharing a shocking secret.

Myra Lucretia Taylor is marvelous as the imperious and impressive May N’Kame, a member of an African ruling family (her son is the brutal dictator of an unidentified 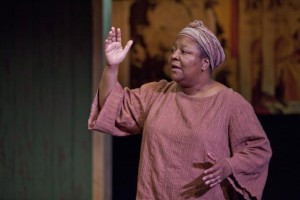 nation) who has traveled to England to find treatment for a painful eye disease. Dr. Cora Gage (the elegant and affecting Gretchen Egolf) is the renowned eye surgeon who will be operating on N’Kame. But first, they meet at Gage’s home in St. Ives, a quiet, peaceful English town near Cambridge, and begin the compelling conversation—negotiation, really—that makes up this absorbing, weighted drama.

Dr. Gage has invited May N’Kame to her home for tea the day before May’s eye operation. May demands to know the reason for the doctor’s unusual gesture of hospitality; and Cora admits that she has a favor to ask. Four doctors have been imprisoned by the ruthless, genocidal ruler who is May N’Kame’s son, detained because they refused to revive torture victims so they can be tortured again; Cora wants May to use her influence with her son to have them freed. 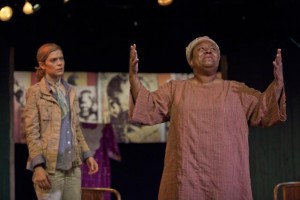 Before she indicates whether or not she will help the doctors, May conducts a sort of interrogation, forcing Cora to recount the tale of the death, in a drive-by shooting in Los Angeles two years earlier, of her only child, a seven-year-old boy; a death for which she suffers terrible guilt.

The two women spar, revealing bits of their stories, challenging each other on the topics of race, violence, self-determination, colonialism, and the ravages of guilt and responsibility. May finally agrees to intercede for the four imprisoned doctors, but only, we discover, because she has her own shocking request to make of Cora.

Taylor is charismatic, a force of nature, as the African matriarch; single-minded and determined to get what she needs from the doctor. Egolf gives a beautifully nuanced performance as Cora; the anguish and fury that she still feels over her son’s death are in opposition to her calm, professional demeanor, and we see her emotions little by little as May asks her probing questions.

The questions raised in the play are important ones. What kind of bargains do we all make as we go through our lives, and how do we determine what actions we can live with and which ones are unconscionable? 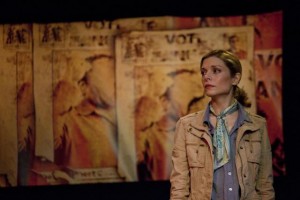 The second act takes place in Africa, as the two women, now bound together, continue their conversation, again over tea. The relationship between the two begins as a contest, a series of challenges, but as they interact they also connect, finally in a very deep way. They are two strong mothers who have lost their sons: one to death, the other to the corrupting effect of power; but for both these women the grief comes with steely resolve. It’s a very fine pair of performances.

The show runs approximately two hours, including one intermission