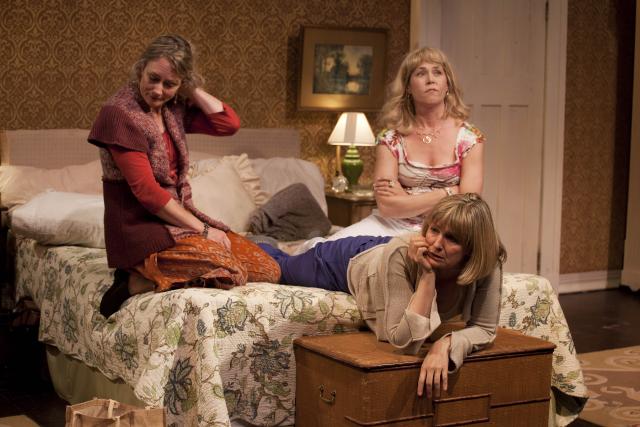 The Memory of Water

CAST: Elizabeth Aspenlieder as Catherine; Jason Asprey as Frank; Nigel Gore as Mike; Corinna May as Mary; Annette Miller as Vi; and Kristin Wold as Teresa

[LENOX, Mass.] – A bitterly comic, heartbreakingly funny production of The Memory of Water by Shelagh Stephenson, notable for outstanding performances from the fine ensemble cast, is running at Shak 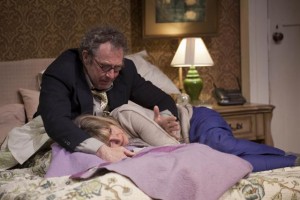 espeare & Company in the Elayne P. Bernstein Theatre through September 4.

Three sisters—Teresa, Mary, and Catherine—have gathered for the funeral of their mother, Vi, at their family home in the north of England. These characters have quite a history together, and watching this ensemble of gifted actresses, Corinna May, Kristin Wold, and Elizabeth Aspenlieder, share the family stories, the family arguments, the family tragedies is eerily reminiscent of spending time with one’s own difficult, albeit beloved, relatives.

The humor in this play, and it is very funny, in a darkly British way, comes from 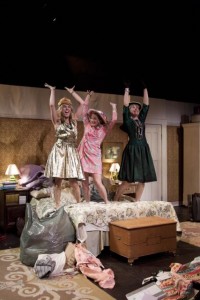 the bickering and disagreements between the three; bickering that reveals just how well they know each other. Kevin Coleman’s skilled, insightful direction layers the humor with deeply expressed sadness and even despair.

All the scenes in the play take place in the mother’s bedroom, as the sisters plan the final details and sort through Vi’s belongings, trying on dresses and hats, sharing memories, arguing, and laughing. Each sister is reacting to the death in her own way, and in doing that, they manage to irritate each other as only sisters can. They also manage to laugh and be silly together, as only family members can do, using laughter to lift their grief, if just for a short time.

Corinna May is Mary, a dedicated doctor with a married boyfriend; she is the only one of the siblings who can see, and speak with, their mother’s apparition. Mary is the most likable sister and she appears to be the most stable, until her encounters with Vi’s ghost and the discovery of a long-kept family secret reveal the flaws in her well-ordered life. May’s beautifully crafted performance is compelling and tender; and Nigel Gore hits all the right notes as the boyfri 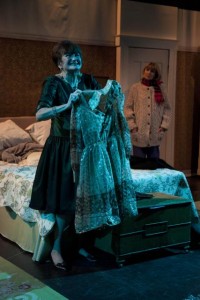 In the second act, we see more of the superb Annette Miller in her strong, affecting portrayal of Vi; we understand why her daughters have conflicting memories of her as Miller shows us the complexity of Vi’s marriage and her position in life and the choices she had to make.

Teresa (a splendid performance from Kristin Wold) runs a health food business with her husband Frank; as the sister who spent the most time caring for their ailing parent, she feels entitled to boss the other two and to play the martyr a bit. Jason Asprey is well-cast as the reassuring Frank, a steady hand at trying to keep the sisters from arguing. At first he is very much the peace-keeper, but Asprey skillfully lets his character’s frustrations and discontent emerge until we learn that his dream is quite different from his reality; something that comes as a shock to Wold’s Teresa. Wold plays her as a bit of a tough cookie, the sister who is ready to make decisions and be practical. 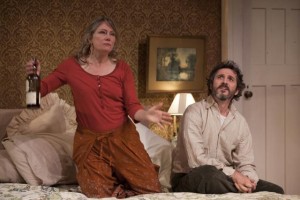 Elizabeth Aspenlieder is terrific as Catherine, a free spirit but also somewhat of a hypochondriac, and, as one of the other characters describes her, a bit of a mess. She has had a lot of relationships, but no successful ones, and we find out she is broke, even though she enters with an armful of shopping bags. She distracts herself with clothes and shoes, but eventually she reveals her unhappiness. Aspenlieder’s Catherine is the funniest of the siblings, and in some ways the saddest.

One of the most brilliant aspects of this skillfully acted production is that, between the director and the ensemble of actors, they have created moments where there is something hilarious and something deeply emotionally distressing happening at the same time, just as in real life. 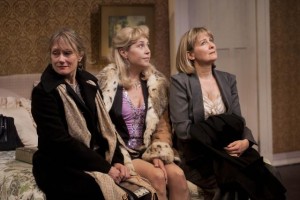 The title refers to the belief, held by some, that water retains a “memory” of substances that have been dissolved in it. Memories of Vi, the mother, now gone, are still present for the three sisters, and the essence of their mother continues to affect them, their behavior, and certainly the way they interact. Recounting the memories is cathartic, painful, and oh, so funny, heartbreak after heartbreak.