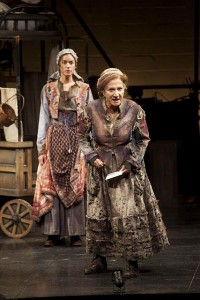 Mother Courage and Her Children by Bertolt Brecht

Olympia Dukakis fully inhabits the title character in Mother Courage and Her Childrenin a gritty, gripping performance, the centerpiece in this powerful production of Bertolt Brecht’s epic anti-war play. Director Tony Simotes deftly moves his excellent ensemble cast through 12 years of violence and deprivation in an onstage world that reflects the seventeenth-century time frame of the Thirty Years 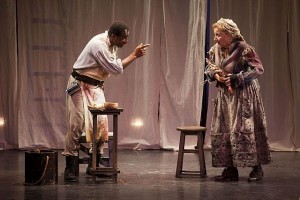 War, but also represents war in any age, at any time.

Bertolt Brecht wrote the play in 1939, following Hitler’s invasion of Poland, setting the action during the Thirty Years War, which lasted from 1618-1648; the 12 scenes in the play take place between 1624 and 1636. The action centers on Anna Fierling, called Mother Courage, who makes her living from the war – a shrewd, if not rapacious, peddler, she travels with the army hauling her wagon of goods – belts, lanterns, brandy, socks – trying to protect her three children from the consequences of the 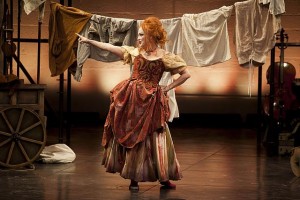 conflict. She hates the war that ultimately takes all her children, but she needs it, needs the economic environment it provides.

Dukakis as Mother Courage is brusque, conniving, and devious. She is very willing to lie or cheat to make money or bargain for another day of survival. The agony of war becomes the status quo – she has adapted to the gruesome, grueling conditions, and when they mistakenly believe that peace has come, she is at a loss as to how to continue. But within the framework of the war, she 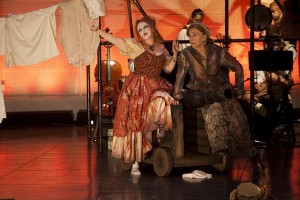 understands what she has to do, even after the appalling losses of her children.

“I won’t let you spoil my war for me. Destroys the weak, does it? Well, what does peace do for ‘em, huh? War feeds its people better,” says Mother Courage.

When the play opens, Mother Courage pulls her wagon onstage accompanied by her two sons and her mute daughter. Eilif, ably played with a soldier-like swagger by Josh Aaron McCabe, is forced into the army. McCabe has a fantastic fight scene – all by himself. The second son, Swiss Cheese, portrayed with 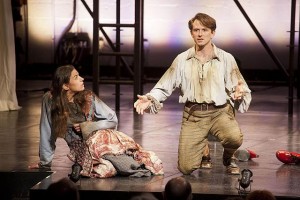 affecting naivete by Ryan Winkles, ends up a victim of the war as well.

Kattrin is magnificently played by Brooke Parks, who delivers a riveting performance without uttering a single intelligible word, from the way she covets the whore’s red boots to her ultimate despair and a final act of extraordinary bravery and sacrifice.

The charismatic John Douglas Thompson is superb as the charming cook, offering a dry, somewhat humorous outlook on their dire situation; he is one of the few people who connects with Mother Courage. Apollo Dukakis is excellent as the chaplain, another 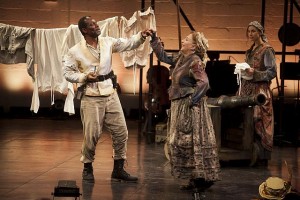 person who establishes a tenuous relationship with Mother Courage, and who has no problem switching his vocation from Catholicism to Protestantism and back again depending on the progress of the religious conflict.

The other standout in the cast is Paula Langton as Yvette Pottier, the prostitute and camp follower. Langton is a commanding figure, her beauty disguised by stark makeup, her emotional pain hidden by an attitude of disinterest. She, like Mother Courage, is operating in survival mode. 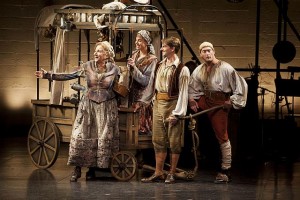 The production team contributed mightily to the success of the production, from the memorable costumes by Arthur Oliver to the set by Patrick Brennan, lighting by Matthew Adelson, and sound by Scott Killian. 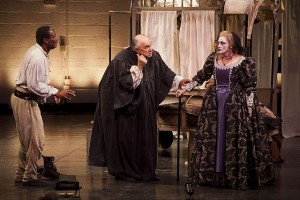 This play has been called one of the greatest dramas of the 20th century and in this reviewer’s opinion, this finely crafted production at Shakespeare & Company is one of this summer’s must-see productions.