Dr. Ruth Westheimer is the subject of a brilliant new one-woman show by Mark St. Germain 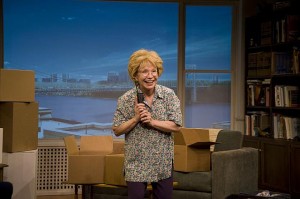 Dr. Ruth, All the Way by Mark St. Germain 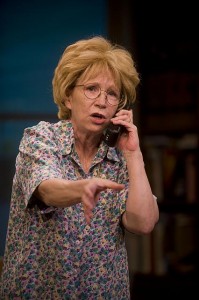 Dr. Ruth Westheimer is well-known for her frank talk about sex, but anyone who thinks her appearances on radio and television sum up her accomplishments would be mistaken. Dr. Ruth is an exceptional woman, courageous and compassionate, whose sunny temperament belies the challenges she has weathered, from the loss of her family in the Holocaust to her struggles as a
single mother living and working in New York City. The story of her remarkable life unfolds in Mark St. Germain’s excellent new play, Dr. Ruth, All the Way, directed by Julianne Boyd, now playing at Barrington Stage Company.

Debra Jo Rupp is simply magnificent as the delightfully irrepressible Dr. Ruth Westheimer in this world premiere
production. This is a sparkling gem of a one-woman show; the story flows beautifully for the almost two-hour-long running time. Every element works: St.
Germain’s brilliant writing is beautifully interpreted by Julianne Boyd’s skillful, insightful direction, to say nothing of Debra Jo Rupp’s superb performance.

This new play was commissioned by Barrington Stage Company, the first show in their New Works Initiative; it’s the sixth premiere of a play by Mark St. Germain at Barrington Stage (St. Germain is an associate artist with the company), and, in fact, the play is being performed on the newly named St. Germain Stage at the Sydelle and Lee Blatt Performing Arts Center.

Debra Jo Rupp, armed with a very believable version of a German-French-Hebrew-Engli 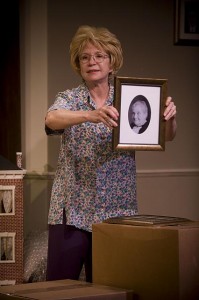 sh accent, is utterly charming as Dr. Ruth. She is effervescent, energetic, and sharp-witted. Rupp doesn’t imitate her, but rather gives the audience an inspired interpretation of Dr. Ruth, from the distinctive way she answers the phone to a whole vocabulary of hand gestures and facial expressions.

We meet Dr. Ruth in her New York apartment, a cluttered, comfortable space filled with cartons. The year is 1997, and the doctor is planning to move, a decision with which her adult children disagree. She is on the telephone with Pierre, her “minister of communications.” When she hangs up the phone and turns toward the audience, she is delighted to see a room full of guests, guests she immediately welcomes into her home. The play continues with Dr. Ruth conversing chattily with the audience as if it was a long, friendly visit.

All the events recounted in t 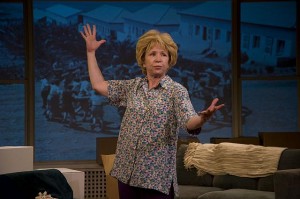 he play are true. Ruth Westheimer was born in Germany in 1928; her name was Karola Ruth Seigel. At the age of ten she was sent to Switzerland, part of the Kindertransport, to escape the Holocaust; her parents and grandmother did not survive. When the war ended, she went to Palestine and lived on a kibbutz; she was only 17. She then moved to Jerusalem to continue her education and while there, joined the Hagenah, the Jewish underground army. After two short marriages and time spent living in Paris, she found herself in New York City, a single mother with a little girl. Dr. Ruth continued to pursue her educatio 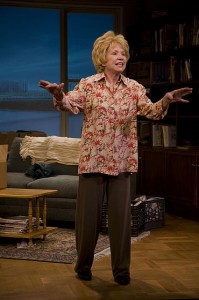 n, working to master English, her fourth language. She was determined to get her doctorate. She met her third husband, Fred Westheimer, in 1961; they were married for more than thirty years. She has written 35 books and hosted nearly 500 television shows.

Presented with a fascinating subject and a storyline that included danger, tragedy, triumph, and romance – every element a playwright could desire – St. Germain has crafted a fascinating narrative. Debra Jo Rupp tells the story in a chronological fashion for the most part – often interrupted by the appearance of significant objects, family photos, and keepsakes as the cartons are packed, one by one.

The script is peppered wit 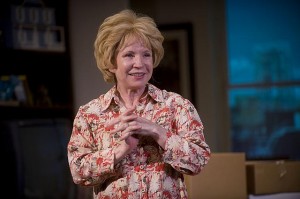 h dates. “Dates are very important,” says Dr. Ruth. “They are anchors for our memories. We don’t know who we are if we don’t remember who we were.” She recalls the date of every milestone exactly. Her humor and optimism are inspiring, and we soon learn that when the story veers too near something painful, she will pick up a book or a
game or a memento and begin to describe a more pleasant time. “Grandmother told me,” she says, “Always smile and be cheerful, you are loved.” The parents and grandmother she last saw when she was 10 years old have been a strong presence all her life, and are to this day. 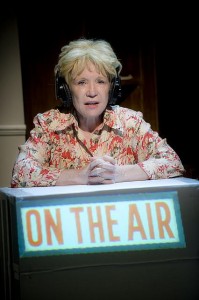 Dr. Ruth Westheimer, as portrayed in this marvelous new play, is an inspiration. Her humor, resilience, and determination are displayed in abundance, and it is a treat indeed to spend an evening with the redoubtable Dr. Ruth.