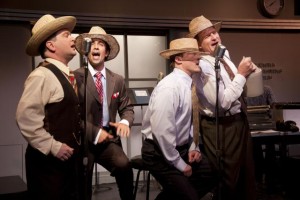 War of the Worlds

Adapted by Howard Koch from the novel by H. G. Wells and additionally inspired by the radio broadcast by Orson Welles 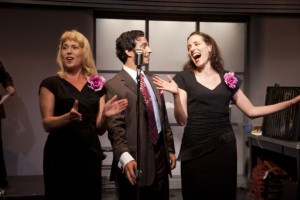 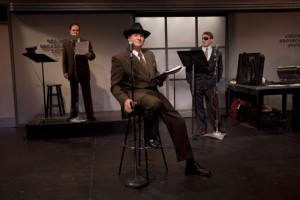 old-time variety show, culminating in a gripping re-enactment of Orson Welles’ renowned War of the Worlds.

On October 30, 1938, radio listeners across the country were terrified when they heard Orson Welles and his Mercury Theatre broadcast of War of the Worlds and mistakenly believed that Martians were attacking New Jersey.  Based on the classic H.G. Welles novel and adapted by Howard Koch, with plenty of inspiration from the original Mercury Theatre production, the new Shakespeare & Company production of War of the Worlds is an imaginative and entertaining evening of theater. 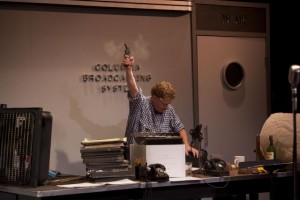 A circa-1930s radio studio has been recreated in the Elayne P. Bernstein Theatre, from the authentic microphones to the APPLAUSE and ON THE AIR signs that cue the studio audience.  The show begins with the actors strolling into the studio, relaxed and bantering, getting ready to perform.

Each of the six accomplished actors in the cast plays multiple roles, as the troupe, in various configurations, presents a sampling of 1930s-type radio entertainment, from tight-harmony bluegrass tunes “Man of Constant Sorrow” and ‘I’ll Fly Away,” to a series of 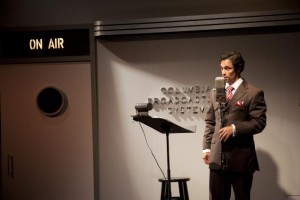 commercial breaks for local businesses, a quiz show, and an episode of an action/adventure serial; to the fully dramatized War of the Worlds segment.  There is even a tap dance number.

Scott Renzoni plays Bobby Ramiro, the emcee, with an authentic 1930s inflection to his voice and a smooth, suave radio manner.  He introduces all the other actors, sings, and takes the helm for the clever “Bobby’s Knowledge Nook Quiz.”  Jonathan Croy is first-rate as Lionel Harrison, leading man and the star of “Ace Moran: American Hero,” who is battling the villain Drakkar Noir, voiced by Josh Aaron McCab 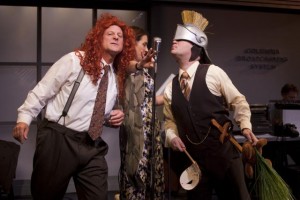 e.  The good vs. evil action allows for lots of great sound effects, and the sounds not supplied by the in-view sound man are provided vocally by the multi-talented McCabe.

Sound designer Michael Pfeiffer is on stage, playing the part of Foley artist Max Michaels, creating a marvelous array of sound effects with a tableful of props from rubber gloves to bells and horns to ice cubes and coconut shells.

Ford, one of the singing Sweetwater Sisters, and then as Carla Phillips, the hard-hitting journalist with microphone in hand who is on the scene in New Jersey, filing her eye-witness account of the Martian invasion.  David Joseph is wonderful as the sophisticated, handsome heartthrob crooner, who is rattled as the news of the Martian invasion begins to come into the studio, but stays calm and keeps on broadcasting.  Dana Harrison is Melinda Maguire, the other Sweetwater sister, and a whole roster of characters in the Pyramus and Thisbe scene from A Midsummer Night’s Dream, the radio play that is under way when the “Martian invasion” begins.  Harrison, Croy, and Renzoni are the harried thespians who are trying to get through their scene and are repeatedly interrupted by the breaking news announcements, a circumstance 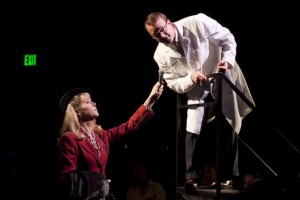 that adds to the hilarity of their scene.  Renzoni is a hoot as Pyramus, aided and abetted by Harrison and Croy.

Where the first part of the production is witty and light-hearted; the second section, which includes the War of the Worlds, is darkly dramatic and suspenseful.  Simotes has wisely decided to take the action outside the studio, so while we see some of the characters at their microphones, continuing to broadcast, the other actors change costumes and with the help of skillful lighting, perform as if they were in the small New Jersey town being overtaken by aliens.  Croy delivers a compelling scene as an Air Force pilot reporting on the destruction, and McCabe is very affecting as the Princeton professor who 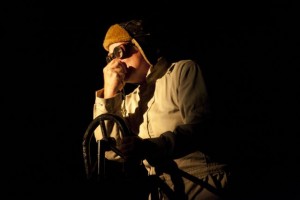 Simotes has skillfully woven the multiple elements of this show into a satisfying production, likely to please those nostalgic for days gone by as well as others looking for a spooky, autumnal show to set the mood for Halloween.  War of the Worlds is an enjoyable mix of smart direction, clever writing, and skilled performances, with just the right amount of old-fashioned suspense.