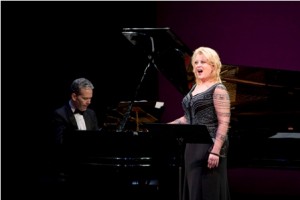 [Great Barrington, Mass.] The Mahaiwe Performing Arts Center, an intimate theater with excellent acoustics, was put to ideal use Saturday night when internationally acclaimed dramatic soprano Deborah Voigt offered a splendid recital of songs from the classical canon as well as great American standards, all to mark the Mahaiwe’s 2011 Gala.

Voigt, accompanied for the evening by Brian Zeger, a superb pianist, performed a generous, almost two-hour-long concert. Her magnificent voice filled the theater: there were moments of power and soaring high notes, of course, but her artistry is also in the interpretation of the songs, and her skill as a storyteller was very much in evidence. Voigt honors the narrative in each song, as sensitive to the meaning of the text as to the beauty in the music.

Voigt looked terrific in a sparkly black top and sweeping black skirt as she took her place in front of the grand piano, and began the evening with three lovely songs by American composer Amy Beach (1867-1944), with texts by Robert Browning. 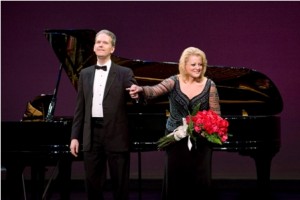 Voigt’s performance was nuanced, masterful, and elegant, and the program was well-chosen for the venue; the songs were varied, from the afore-mentioned Beach to Verdi to Bernstein, and covered genres from Romantic to contemporary, but all were well-served by the simple format of singer and piano.

The second grouping of songs was by Guiseppe Verdi (1813-1901) and included two lovely, rather tragic pieces (“Non t’accostare” and “Deh, pietoso”) followed by a drinking song (“Brindisi”) that allowed Voigt some comedic moments as she slid along the piano feigning intoxication, and finishing with “Stornello,” a humorous take on relationships. Voigt clearly has a mischievous sense of humor; there was a definite twinkle in her eye during the last piece.

The next five songs were by Richard Strauss (1864-1949), “Ich trage meine Minnne,” “Schlechtes Wetter,” “Lob des Leidens,” “Ach, Lieb, ich muss nun scheiden” and “Fruhlingsfeier,” ranging from poignant to sorrowful to the cries of a pagan rite. After the intermission, Voigt returned to the stage, performing works by Ottorino Respighi (1879-1936) and contemporary composer Ben Moore, before finishing with six songs by Leonard Bernstein, including several with lyrics by Betty Comden and Adolph Green. The Bernstein selections gave Voigt the opportunity to do some scat singing, some bluesy syncopation, and a sexy, sultry torch song; and her rendition of “Somewhere” from West Side Story was just beautiful.

For an encore, she gave a terrific rendition of Irving Berlin’s “I Love a Piano,” even joining Zeger at the piano for a ragtime duet, flashing a wicked grin at the delighted audience. Her final song of the evening was a superb performance of “Can’t Help Lovin’ Dat Man” by Jerome Kern and Oscar Hammerstein, from the musical Showboat.

Deborah Voigt delivered an extraordinary evening of music at the Mahaiwe, a fitting celebration for this most recent incarnation of the beautifully restored theater, now in its seventh season.