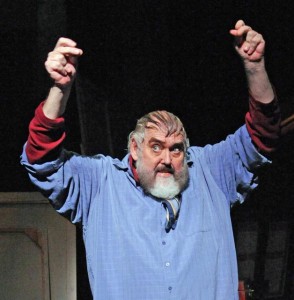 Zero Hour opens to the strains of a klezmer tune as we see Zero Mostel (portrayed by actor Jim Brochu) at work in his studio; facing the canvas on the easel, he growls and barks at an unseen individual knocking at the door. And then Brochu turns to the audience, revealing his startling resemblance to Mostel, courtesy of a massive comb-over, bushy beard, and beetling brows over glaring eyes. He is talking to the reporter (who is never seen or heard) from the New York Times who has come to interview him. This is the framework that allows Mostel to reminisce, recounting his life story. Zero Hour, a one-man show about the iconic actor Zero Mostel, is now running at Barrington Stage Company’s Stage 2 in downtown Pittsfield, Massachusetts, through June 5.

Jim Brochu, who wrote the play and stars as Mostel, has mastered facial expressions, vocal inflections, even hand positions that recall Mostel. Brochu’s portrayal is riveting, not only in the way it recalls Mostel, but in the sheer power he brings to sharing the story of Mostel’s fascinating life—a life that includes three Tony Awards and success on stage and in film, as well as overcoming the blacklist, family estrangement, and a serious bus accident. 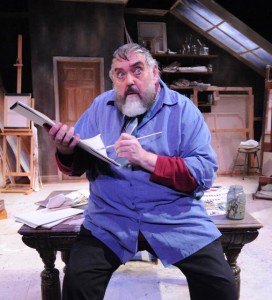 Brochu begins by talking about Mostel’s love of art and childhood trips to museums with his mother, who encouraged him in his painting and drawing—Mostel considered himself primarily a painter, and Brochu draws and paints as part of the show.

Brochu brings enormous energy to the role, effectively communicating the manic, unpredictable, hilarious, sarcastic, ranting, much-larger-than-life character of the real Mostel. And he has the master’s comic timing just right.

Zero Mostel’s life is rich subject matter, and Brochu does it justice; the writing is good and he unfolds the events in Mostel’s life to great dramatic advantage. Brochu has woven in Borscht Belt era one-liners, anecdotes, and bits from Mostel’s early stand-up routine.

Brochu, as Mostel, recounts the story of his first unhappy marriage; enlisting in the Army; working for the WPA; falling in love with his second wife, a beautiful former chorus girl; how his Orthodox Jewish family sat shiva for him, regarding him as dead to them for having married a Christian; even how he got the nickname of Zero.

Mostel was blacklisted during the McCarthy era, an experience that embittered him for the rest of his life. Brochu’s narration about the blacklist is compelling, giving the audience a real insider’s view of the ordeal. And Brochu reveals Mostel’s rage at the people in show business who “named names.” He rails and rants about the anti-Semitism of the blacklist, calling it “an intellectual final solution,” and he rages about the unfairness of the proceedings. Brochu is particularly effective in relating the story of Mostel’s close friend Phil Loeb, who was hounded to his death. 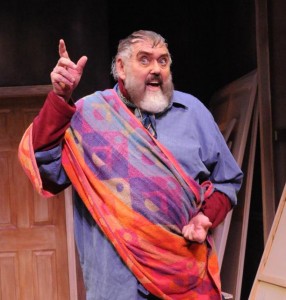 Some years after the blacklist, Mostel and other New York actors began to regain their careers, and he was about to open in a new show when his leg was shattered in a bus accident. Doctors wanted to amputate, but Mostel refused. His leg was saved, but he walked with a cane after that: Brochu infuses this story with a sense of Mostel’s resiliency.

Mostel went on to perform in Rhinoceros, A Funny Thing Happened on the Way to the Forum, and, of course, Fiddler on the Roof. Brochu gives us wonderful stories about the genesis of all these roles, many very funny, some quite bittersweet.