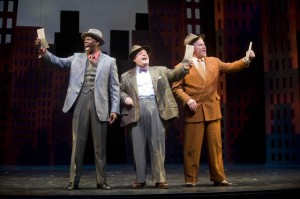 [PITTSFIELD, Mass.]—Mythic mid-century New York, as envisioned by Damon Runyon, bursts onstage with exuberance in the spectacular new production, directed by John Rando, of the iconic American musical Guys and Dolls on the Mainstage at Barrington Stage Company, now through July 16. The outstanding cast of accomplished singers, actors, and dancers delivers this classic show with a fresh sense of fun and joy. 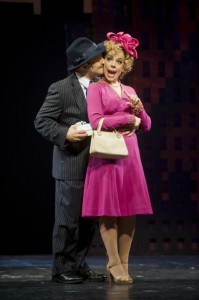 Guys and Dolls opens with the promenade of street-wise city characters in “Runyonland” and then Nicely-Nicely Johnson, Benny Southstreet, and Rusty Charlie sing the brilliant first number, “Fugue for Tinhorns,” with masterful harmonies and a big finish. It would be a showstopper, if it wasn’t the first song. Daniel Marcus is spot-on as Nicely-Nicely, and his voice is marvelous; Timothy Shew is just right for Benny Southstreet and he has a wonderful voice as well. The songs sound terrific; everyone in this cast can really sing, and the nine-piece orchestra sounds like a much bigger band.

Michael Thomas Holmes is completely charming and funny as Nathan Detroit, trying to find a location for his “oldest established permanent floating crap game” while avoiding matrimony with his fiancée of fourteen years, Miss Adelaide. Leslie Kritzer plays Adelaide with a sassy 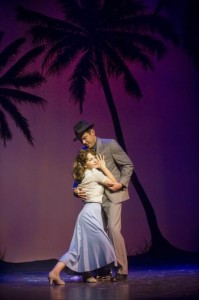 sexiness; and her singing voice is spectacular. Kritzer delivers the familiar tunes with a fresh twist; her jazzy scat singing at the end of “A Bushel and a Peck” is terrific, and when Holmes and Kritzer have a hold-the-note contest in their “Sue Me” duet, well, it’s just great. Kritzer’s facial expressions are priceless; she manages to get laughs with just a glance.

Morgan James, properly earnest as Sarah Brown, running the Mission, and Matthew Risch, savvy and smooth as gambler Sky Masterson, create real sparks when they begin to fall for each other. James has a gorgeous voice, perfect for the lovely melodies Sarah sings, and Risch sings very well, too. Their duets are delightful, and Risch’s interpretation of “Luck Be a Lady” is another great moment. 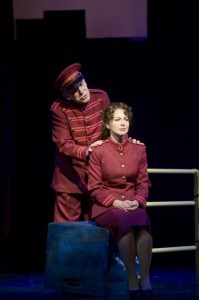 In directing the show, John Rando has achieved an ideal balance between the humor, the broad characters, and the sincerity of the relationships: all the fun of the snappy lines and snarky comments is there, but there’s a real sense of tenderness between Adelaide and Nathan, as well as the chemistry between Sky and Sarah.

The choreography by Joshua Bergasse is spectacular; energetic, athletic, appealing, and perfectly executed by the cast members. The Crapshooter’s Dance in the sewer is outstanding. Darren Cohen does his usual excellent job as music director, and every number in this show is great, from the barbershop harmonies by the men’s ensemble to the Havana scene with hot salsa dancing and the Hot Box Girls’ burlesque numbers.

Gordon Stanley as Arvide Abernathy offers a touching “More I Cannot Wish You,” Peggy Pharr Wilson is a hoot as General Cartwright, and Michael Nichols is a suitably intimidating Big Jule. And of course, Daniel Marcus delivers a truly show-stopping rendition of “Sit Down, You’re Rockin’ the Boat,” with just about the whole cast on stage.

The designers on this production did an amazing job, too. Alexander Dodge framed the stage with skyscrapers, rolled out the Mission, dropped in the Havana palm trees, and created a fantastic underground sewer set for the crap game. The costumes are terrific, from the snazzy sport coats on the gamblers to the slinky dresses on the showgirls. 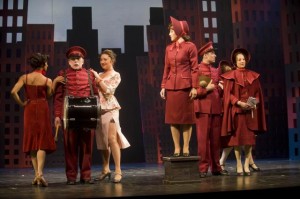 Guys and Dolls (subtitled A Musical Fable of Broadway) by Frank Loesser, Abe Burrows, and Jo Swerling, based on characters and stories created by Damon Runyon, won the Tony back in the early 1950s when it first opened on Broadway. It is every bit as much fun now, especially in this terrific production. It’s a heartfelt, funny, moving, exciting evening in the theater. 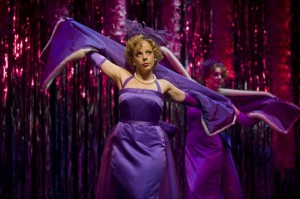