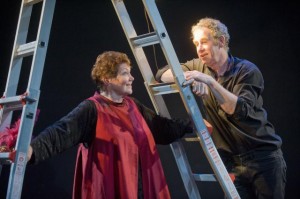 [LENOX, Mass.]—The extraordinary Tina Packer plays Petruchio’s Kate, Joan of Arc, Cleopatra, Beatrice, Margaret of Anjou, and Juliet, among many, many others, in Women of Will, The Complete Journey: Parts I-V, her extraordinary master class in the works of William Shakespeare, running now through July 10 in the Elayne P. Bernstein Theatre at Shakespeare & Company. Part performance, part lecture, part debate, part exposition, Women of Will, written by Packer and performed by Packer and actor Nigel Gore, is based on her decades-long immersion, as actor and director, in the works of the Bard.

For anyone interested in theater, in Shakespeare, in literature, or in the craft of acting, this is an opportunity not to be missed. Packer is a delightful teacher, her lively explanations punctuated with passion, humor, and her frequent, infectious laugh. Packer is joined by her acting partner Gore, and Women of Will is directed by Eric Tucker. At various times in her explanations of the texts, Gore jumps in, offering his opinion, sometimes agreeing with Packer; sometimes not. 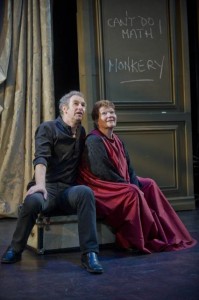 Carefully selected scenes from the Shakespearean canon illustrate the phases and developments in the playwright’s life’s work as revealed in the female characters; Packer has added extensive explanation and commentary; and it all comes alive when she and Gore perform the many excerpts.

The five sections of Women of Will are titled Part I: Warrior Women – From Violence to Negotiation; Part II: New Knowledge – The Sexual Merges with the Spiritual; Part III: Living Underground – Or, Dying to Tell the Truth; Part IV: Chaos is Come Again – The Lion Eats the Wolf; and Part V: Maiden Phoenix – Or, The Daughter Redeems the Father. Each is about two hours long and each part can be seen on its own. [Full disclosure: this reviewer attended last Friday’s performance of Part II and Wednesday evening’s performance of Part 1, only briefly interrupted by the thunderstorm; plans to see the complete series are in the works.] 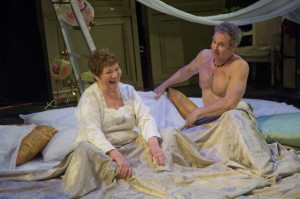 Women of Will, Part I, begins with Kate and Petruchio in The Taming of the Shrew, allowing Packer to explain how women were either meek virgins or fiery viragos, warrior women, in Shakespeare’s early work. Packer is marvelous, delivering Kate’s submissive speech three ways, from angry to baby-doll submissive to clinically depressed, playing against Gore’s forceful Petruchio. The next warrior woman Packer portrays is Joan of Arc, from Henry VI Part I; Gore plays the dauphin and then Henry. Packer then plays Margaret of Anjou, first with Gore as Suffolk in a love scene, and then with Gore as the Duke of York, and she gleefully murders him.

Packer is chameleon-like: one moment she is the pedagogue, and the next she is a queen, a shrew, a maiden, or a warrior, completely transformed and utterly convincing in all these roles. Gore is equally excellent; his intelligent and persuasive portrayals of a wide range of characters aided by his mastery of the language and his craft. 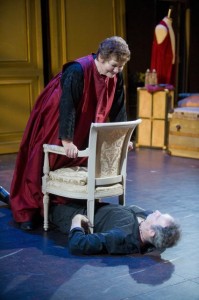 The set is simple but it serves the piece beautifully; the same can be said of the lighting and sound design. Simple, interchangeable costume pieces work beautifully, from Packer’s simple tunic and trousers to a regal red robe.

Packer and Gore perform a compelling scene from Richard III; and then they do a lengthy excerpt from Titus Andronicus, where Packer plays Tamora, Queen of the Goths, and finally, Part I ends with Juliet.

Women of Will, Part II, opens with Gore and Packer delivering the balcony scene from Romeo and Juliet. Watching Packer as Juliet is a treat; she is by turns winsome and sweet, plucky and charming, and entirely convincing as a character somewhat younger. The same is true of Gore, who is quietly passionate and persuasive as Romeo.

The next excerpt is one of the last scenes in Love’s Labour’s Lost with Packer as the princess of France; followed by an excerpt from The Merchant of Venice, with Jessica, Shylock’s daughter, and her husband, Lorenzo, a non-Jew, comparing their relationship with storied ones from history and literature.

Much Ado About Nothing offers Gore and Packer as Benedick and Beatrice, sparring and bickering as they discover their love and explore their relationship. They are marvelous as these very funny and most contrary lovers.

Part II, after the intermission, is all scenes from Antony and Cleopatra, the play Packer describes as Shakespeare’s last big statement about sexuality and spirituality.

One of the pleasures of Women of Will is listening to Packer’s adept explanations of the political complexities that are so important to the plots of plays like Antony and Cleopatra or the English history plays. Along the way, Packer discusses the way Shakespeare’s writing demonstrates an understanding that women are the equals of men. She also mentions her theory that Shakespeare was violently in love with Amelia Bassanio, a Jew originally from Venice, who belonged to a family of court musicians, and that this changed his writing.

In her author’s note in the program, Packer explains that in studying the “female characters in Shakespeare’s plays in the order in which the playwright wrote them, I have been tracing their development and maturation over the span of the canon.” She finds that Shakespeare revealed much about “his own character and spirit as an artist” through the women in his plays. Packer reveals her own character and spirit in these marvelous works as well, sharing her knowledge and passion with generosity and superb artistry.

Running time for Parts I, II, III, and V is two hours with intermission; Part IV is approximately 80 minutes with no intermission.